Despite the protection offered to sea turtles in Bermuda, there are still numerous threats. Data from stranded animals suggest that boat strikes and entanglement (a significant number of which involve monofulament fishein line left in the marine environment by local shoreline fishers) are the most prevelant anthropogenic hazards causing reported standings of sea turtle in Berumda. Both are associated with high levels of mortality. The Wildlife Rehabilitation Program at the Bermuda Aquarium Museum and Zoo receives as many as fifty stranded sea turtles each year. 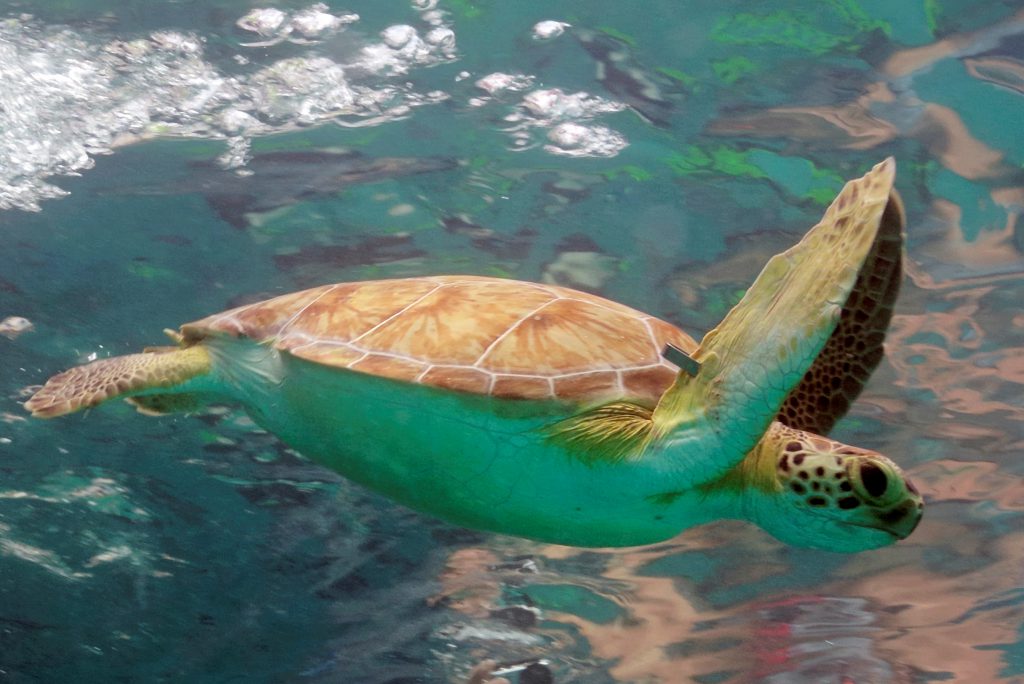 This program has resulted in the recovery and release of many stranded, injured and sick sea turtles. Some are caught accidentally on hook and line, or are injured by large predators such as sharks. Others are injured by speeding boats with propellers that can easily slice through the turtle’s tough shell. Still others find themselves entangled in discarded fishing gear which causes serious injury, if not drowning. Another threat in Bermuda today is ingestion of plastics. During necropsies of dead, stranded turtles the presence of plastics in the digestive system is regularly observed. During our necropsy session in 2011, plastics were found in the digestive tracts of four of 12 post-hatchling green turtles and loggerheads that stranded in Bermuda during the winter of 2010/2011.

Turtles that strand alive are regularly brough back to good health by BAMZ staff and released back into the wild. During their revoery, they are often used in educational exhibits. Once they are ready to be released into the wild, the turtles are tagged with Bermuda Turtle Project tags and released in appropriate habitat. Thanks to our friends at BIOS, we are able to send posthatchlings out to Sargassum mats in the open ocean. Larger turtles are released on the Bermuda Platform.

One small green turtle, named Tex by Aquarium staff, was attacked by a shark and had open wounds through the shell and into its body cavity. It was bleeding profusely, and a rear flipper was completely ripped off. TEX had little hope of surviving the ordeal. Aquarium staff pulled fragments of broken bone and shell from TEX’s body cavity and then built a cast out of epoxy resin. After TEX spent eight weeks in this cast, we were amazed to find healing and regeneration of shell. Our friend Tex made a complete recovery and was returned to the wild. 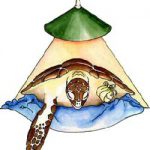 In 1992, an immature green turtle was found beached on our south shore, lethargic and bleeding quite badly. The stranded green turtle was lucky to have survived an encounter with a shark. The top shell of the animal was fractured, the front right and the hind left flipper were severed, and the body had numerous lacerations.

With no time to lose, the shattered bone was cleanly cut away at the joint and the musculature and skin were pulled together over the stump and stitched. Other wounds were cleaned and treated and the sea turtle was given injections of antibiotics to prevent infection. As we have seen before in the Wildlife Rehabilitation Centre (WRC) at BAMZ, sea turtles have a remarkable ability to heal. After ten days, the sutures were removed. 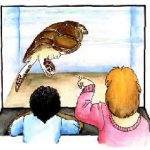 After three weeks, the wound had completely healed and new skin neatly covered the end of the bone.

Our patient, who had by now been given the name “Stitch,” was transferred into one of the display tanks for a period of recuperation.

For those who wonder how we expected a flipper-less sea turtle to survive in the wild, rest assured that there are many sea turtles in the wild with missing limbs that fare quite well. They are often encountered during the research sampling sessions of the Bermuda Turtle Project, and are quite adept at eluding our capture attempts. They learn very quickly how to compensate for a missing flipper by counteracting their 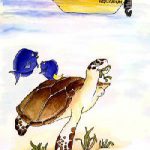 swimming strokes with the flipper on the opposite quarter of the body. These turtles can be just as fast as those with all their limbs.

In October of 1996, Stitch had a tag with a number and a return address fixed to his left front flipper and was wished well upon his way as he was released in the quiet waters off Shelly Bay.

On December 12, 1996, Stitch was found once again. He was stranded off the coast of Georgia, over 1,000 kilometers (600 miles) from Bermuda. Biologists with the Georgia Department of Natural Resources reported that the turtle was stunned by cold water temperatures. Stitch was taken to the Georgia Marine Extension Service Aquarium on Skidaway Island for recuperation and now joins about a dozen other rescued and injured sea turtles at a special Sea World exhibit in Florida. 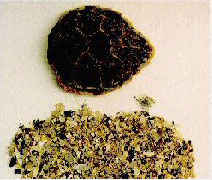 Unfortunately, not all of the sea turtles we take in recover. Shortly after admission into the Aquarium’s Rehabilitation Centre, this very young hawksbill turtle died. An autopsy revealed that the animal’s intestines and stomach were completely impacted with a large quantity of plastic debris (image at right).

After leaving the nesting beach, young sea turtles live in ocean driftlines where bodies of water converge and concentrate food such as Sargassum algae and associated invertebrates. Marine debris also accumulates in these areas and accidental ingestion of such plastics, styrene pellets, tar and debris, is now a serious problem contributing to sea turtle mortality.