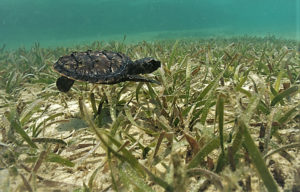 Our findings show that Bermuda serves as a year-round habitat for immature green turtles and hawksbills, providing a ‘developmental’ feeding ground for nesting beach populations that are located mostly in the Caribbean, but may exist as far away as Cyprus in the Mediterranean.

Our data show that green turtles arrive at Bermuda at a size of about 25 centimeters (10 inches) and leave by the time they have grown to approximately 75 centimeters (30 inches). Stranding records show a similar distribution of sizes, with a very small number of turtles that are smaller than the minimum size of turtles caught in the net. 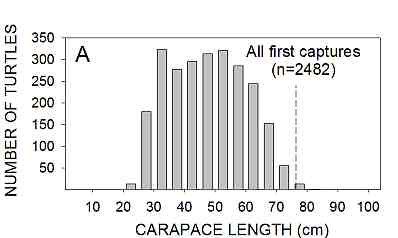 Green turtles are about the size of a silver dollar when they hatch, and take about thirty to fifty years to reach maturity. Thus, it is easy to see how a project such as this one, which has been gathering data since 1968, is so valuable. It takes years to collect enough data to understand life history patterns.

The gaps at either end of the size distribution graph for green turtles in Bermuda represent the epipelagic phase that follows hatching, previously known as the ‘lost year,’ and the large but still immature sub-adults that have departed to the adult resident habitat.

During the years 1990 through 1992, most turtles captured by the project were laparoscoped. In this procedure, a small incision is made through the body wall of the turtle and the gonads are viewed using a surgical scope to determine sex and maturity status. By examining 138 immature turtles, we were able to establish that none were mature and to calibrate a hormone assay that allows us to determine a green turtle’s gender from a blood sample. 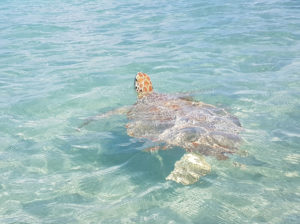 Caldwell and Mowbray wrote in 1954 that green turtles in Bermuda were probably itinerant and were delivered to the island annually by the Gulf Stream. By sampling year round, we were able to show that green turtles are year round residents. We actually found a density in January matching, if not surpassing, that of the summer months. This is possible because Bermuda waters do not drop drastically in temperature during winter months. Bermuda waters stay as warm as those of the SE coast of Florida.

Information from local recaptures has shown that young green turtles in Bermuda establish specific feeding areas. Even if displaced, they usually return to these particular sites and may stay there for many years. 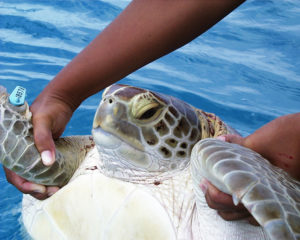 The greatest number of times that a single individual turtle has been captured in Bermuda is seven. This turtle was captured on the same grass flat each time. The longest period of time over which we know that an individual has remained in Bermuda waters is 14 years. Based on the size at first capture, these 14-year residents were probably in Bermuda for a few years before their first capture and probably stayed a few more years before departing. So, we expect a maximum residency time of about twenty years for green turtles.

Using a Geographic Information System (GIS) we can visualize patterns of habitat use that may be related to seasonality, turtle size, sex, and other biological and physical characteristics of the habitat. Analysis of turtle distribution data with GIS will be of great benefit to management authorities in identifying critical habitat.

We have been comping and analyzing genetic sequence data from Bermuda turtles since 1996. Our studies show that Bermuda green turtles match gene sequences of green turtle populations from Florida, Mexico, Costa Rica, Cuba, Aves Island (near Dominica), Suriname, Cyprus, and either Ascension, Brazil or Guinea Bisseau in the South Atlantic. 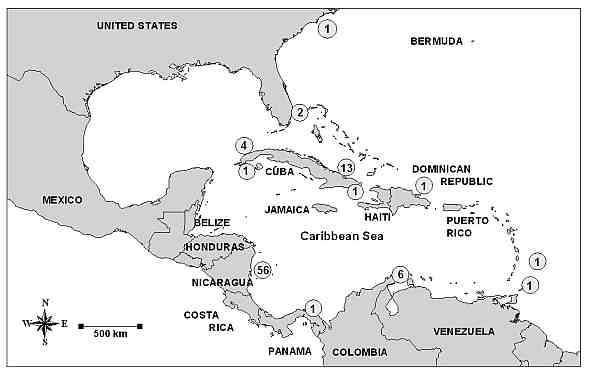 As of 2005, 88 green turtles caught and tagged in Bermuda have been found overseas in Venezuela, Colombia, Nicaragua, Panama, Cuba, the Dominican Republic, Saint Lucia, the U.S. and Grenada. This information, along with genetic results, highlights the regional significance of Bermuda to the green turtle. It also confirms the need for international cooperation in sea turtle conservation. Unless green turtles are protected on the nesting beaches and in their adult ranges, Bermuda may lose its feeding aggregation, in spite of efforts to protect turtles in Bermuda waters. To date, the project has recorded only one international recapture of a hawksbill turtle. The animal was captured with a spear gun off the east coast of Grenada 11 years after being tagged in Bermuda.

Between 1996 and 2008, we deployed eight satellite transmitters attached to Bermuda green turtles. These transmitters transmit messages to satellites when the turtles surface to breathe. Data (latitude, longitude, location accuracy, dive frequency and duration, and temperature) are uploaded to the satellite. Positions of the turtle are plotted using the Geographic Information System developed for the project. One of these transmitters sent data for fifteen months. Most positions recorded were centered on the capture area, and it is believed that the turtle did not travel any significant distance. However, one of the turtles fitted with a transmitter did make a significant journey. 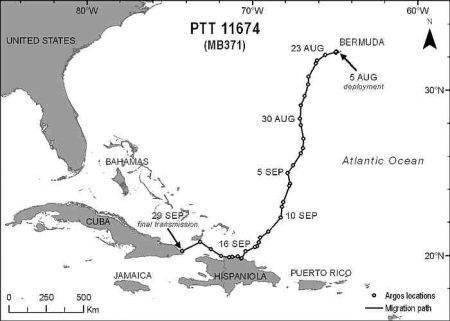 In August 1998, a 78.6 – cm green turtle carrying a satellite transmitter departed the Bermuda Platform about two weeks after attachment. We were able to record her remarkable journey of approximately 1,500 kilometers (932 miles) which took her south to the Dominican Republic and then west to Cuba. This turtle, named “Bermudiana,” was originally captured on August 5th with a net on the seagrass flats off the northwestern end of Bermuda. Location and dive data were received for the turtle on a daily basis. The turtle was just north of the coast of the Dominican Republic as Hurricane Georges passed by, but there were no observable effects. Several days later, however, transmissions changed dramatically and eventually stopped. We believe that Bermudiana was captured off the eastern tip of Cuba, near the town of Baracoa (map shown above).

Starting in 2011, we attached transmitters that can take GPS location data, in addition to standard Argos data. These will allow a much more precise understanding of how young green turtles use Bermuda waters. Results from these transmitters can be seen here.

The Bermuda Turtle Project serves as a useful vehicle for public outreach and education. In addition to the many volunteers who join the field efforts each year, teachers, school classes, and eco-tour groups are educated about the plight of the endangered green turtle through slide shows and lectures. Guest scientists contribute nearly annually to the project, the associated course, and to public outreach via lectures. The project has benefitted greatly by visits from Robert George, Tierry Work, Brendan Godley, David Owens, Marydele Donnelly and Robert van Dam. Some of the basic findings of the project appear in a Bulletin of the American Museum of Natural History.

The Bermuda Turtle Project hosts an International Course on the Biology and Conservation of Sea Turtles each year. The two-week course consists of lectures, class discussions of assigned readings, a necropsy session, and extensive field work capturing immature green turtles.