The living sea turtles are air-breathing reptiles that evolved from freshwater turtles during the age of dinosaurs. They represent a single evolutionary radiation that is adapted for life in the ocean. Their fossil record extends back at least one hundred and ten million years, but today all sea turtle species are threatened with extinction.

The distribution of sea turtles is mostly tropical and subtropical seas but several species migrate into temperate or even arctic waters to take advantage of food resources there. With the exception of females coming ashore to lay eggs and the occasional population whose members bask on beaches, sea turtles spend their entire lives in the ocean.

No means of determining age in sea turtles has been perfected, but recapture data suggest that they are long-lived. It is believed that green turtles may take up to fifty years to mature and may have life spans of seventy-five or more years.

Sea turtles are strong swimmers capable of flying through the water with the powerful strokes of long, paddle-like fore flippers. They use their hind flippers as rudders. The development of the forelimbs and the need for streamlining resulted in a reduction in the ability to retract the head and neck which is a means of protection for most other turtles and tortoises. This reduction is compensated for in sea turtles by a bony skull roof. Additional protection from predators is provided by a hard shell and large body size.

Hatchling sea turtles have many enemies: ants, crabs, lizards, birds, dogs, raccoons, pigs, coyotes, and many carnivorous fish such as snappers, groupers, barracudas, dolphin and sharks. Man’s impact on all life history stages has been considerable (See Threats and Rehabilitation).

Hatchling sea turtles have many enemies including ants, crabs, lizards, birds, dogs, raccoons, pigs, coyotes, and many carnivorous fish such as snappers, groupers, barracudas, dolphin and sharks. Man’s impact on all life history stages has been considerable (See Threats and Rehabilitation).

Adult sea turtles, which are both fast and heavily armoured, have few natural enemies. Sharks and man pose the only real threat.

Despite being listed as endangered species, sea turtles continue to be threatened with extinction by man.

Sea turtles spend nearly all of their lives in the ocean and have excellent senses of smell and hearing. While sight is good underwater, turtles are thought to be near-sighted on land. Green turtles sleep at night. Hatchlings sleep at the surface with flippers tucked back over the carapace (top shell); adults wedge themselves into crevices in the reefs, rest on the bottom, or on soft corals.

Male and female sea turtles do not differ externally until they begin to reach maturity. Mature male turtles have much longer tails than females and the claw on each fore flipper of the male becomes elongated and curved. These features assist the male in grasping the female during mating.

Adult female green turtles make regular reproductive migrations from their feeding grounds to their nesting beaches (the place where they originally hatched). This important event can entail a migration of hundreds or thousands of kilometers and takes place approximately every two to four years. It is unknown exactly how the females find the beach, but numerous clues, including olfactory (smelling), magnetic, and celestial ones have been proposed.

Mating usually takes place off the nesting beach or along the migratory route. Females are able to store sperm in their oviducts and may mate with more than one male during the same nesting season.

Sea turtle eggs are leathery and look much like ping pong balls.

Nesting usually occurs at night during the warmest months of the year. The process of ascending the beach, digging a nest, depositing eggs, concealing the nest, and returning to the sea takes from one to three hours.

The sex of a sea turtle is determined by the temperature of the sand in which the egg incubates, with cooler temperatures producing males.

Clutches range in size from fifty to two hundred and fifty eggs, but vary less within any one species. Most females lay two to five clutches each nesting season. The eggs incubate in the sand for about two months, after which the hatchlings emerge together from the nest and scurry down the beach to the sea. 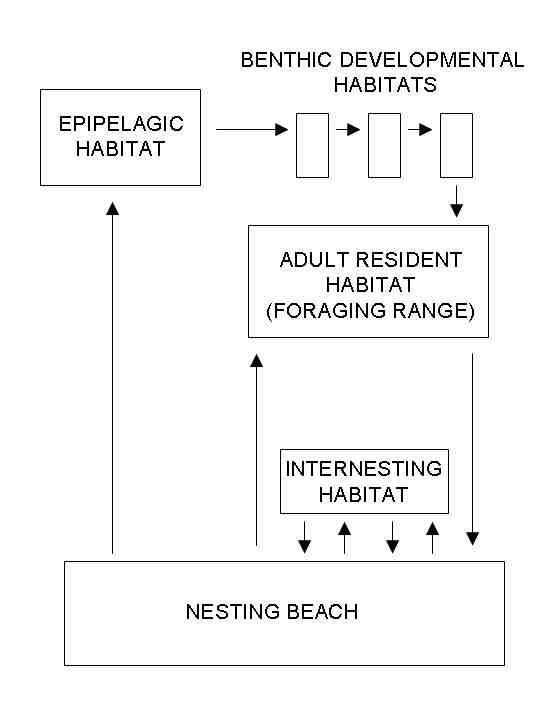 This chart of a sea turtle’s life cycle shows all of the stages through which each individual will pass. The model fits the green turtle and hawksbill best; other species deviate from this plan to various degrees. After hatching on the nesting beach, the hatchling enters an epipelagic stage during which it uses ocean currents for much of its travles during the first few years of life. When large enough to feed on the bottom, juveniles of most species move to inshore habitats. In the case of the green turtle in Bermuda, they may remain in this “benthic developmental habitat” for fifteen years or more. When they depart, they migrate to adult foraging ranges where they mature. Once mature, they will begin periodic migrations to a nesting beach. Because females lay multiple clutches of eggs during one season’s visit to the nesting beach, and require about two weeks between clutches, they spend significant amounts of time in the internesting habitat.