The green turtle, the most common sea turtle in Bermuda’s waters, once nested abundantly on our beaches. William Strachy’s narrative of 1610 noted “even then the Tortoyses came in again, laying their eggs (of which we should find five hundred at a time in the opening of a shee turtle) in the sand by the sea shoare.” New World explorers wrote of huge herds of turtles. The explorers would capture many of the turtles, which were capable of remaining alive for weeks in the holds of their ships, providing fresh and nutritious meals for their long ocean voyages. 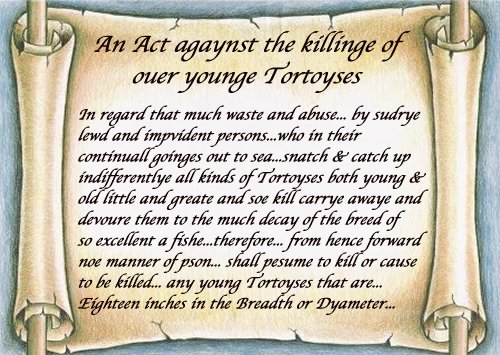 In 1610, settlers noted that “on the shores of Bermuda, Hogges, Turtles, Fish and Fowle do abound as dust of the earth.” With recorded takes in the accounts of early settlers of more than 40 turtles per boat per day, it was not long before the local stocks of sea turtles were noticeably depleted. In 1620, only eleven years after Bermuda’s colonization, an act of the Bermuda Assembly against the killing sea turtles was passed. 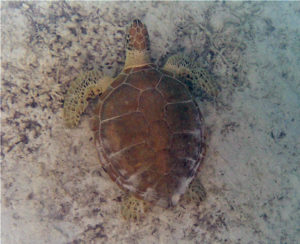 This may well be the New World’s first written conservation legislation. In spite of this early protection of young turtles, larger turtles were fished until 1973. If our forefathers knew then what we know now – that the sea turtles growing up in Bermuda were all from other nesting beach populations – then they surely would have protected the nesting females and Bermuda’s nesting population may not have become extinct in the early 1800s.

In an attempt to reestablish a nesting population in Bermuda, over twenty-five thousand green turtle eggs were transplanted from Costa Rica in the 1960s and 70s by the Sea Turtle Conservancy and buried on beaches in Bermuda. More than sixteen thousand of these eggs hatched. Based on the premise that turtles incubated at their home beach return to that beach to lay their eggs, it was hoped that these transplants would eventually return to reproduce in Bermuda. However, no nesting by green turtles in Bermuda has been documented since the transplant experiments occurred, and it seems unlikely that the effort will succeed. Studies were made on the behavior of these hatchlings by Jane Frick. She found that, upon release, the hatchlings all took a direct course to the southwest away from the island and out into the open ocean. This work heightened local awareness and led to further legislation in 1973. Since that time, all sea turtles have been completely protected locally. 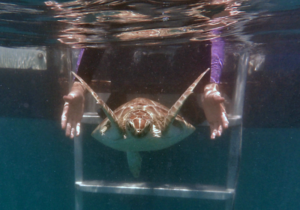 The shallow grass flats of Bermuda provide excellent grazing areas for green turtles and coral reefs provide habitat for hawksbills, although in smaller numbers. The turtle tagging project is one of the longest-running projects of this kind in the world. It has developed into a multi-faceted study of sea turtles.

The primary aim of the Bermuda Turtle Project is to fill in critical information gaps in the life history of sea turtles that inhabit Bermuda waters and to make that information available to scientists, managers and the public.

In order to protect sea turtles, we must know where they occur, in what numbers, at what times, and what factors contribute to their mortality. In essence, population and life history models need to be refined to include all that we can learn about their entire life cycle. The special contribution that the Bermuda Turtle Project can make is to elucidate the biology of sea turtles in developmental habitats — places where young turtles grow up in the absence of adults.